The place-name Monterubbiano derives from the fact of having been urbs during the Roman Time. Monterubiano historical centre gains in importance throughout the Medieval Age, thanks to Francesco Sforza’s work, who built an extension of the surrounding wall. Among the sevral wonders that Monterubiano offers, you can find the new Cultural Centre of San Francesco, a modern structure, obtained by the renovation of an ancient Franciscan convent, that houses meetings, conferences, exhibitions and  performances. 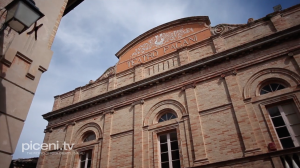 Nowadays, the church, which is annexed to the convent, is used as the Auditorium of the Centre, though it still keeps intact the memories of a 800-old history. The convent houses the Civic and Archaeological Museum, the city library and the Centre for Environmental Education with its medicinal garden. It is a very special place for the city dwellers who, like former days monks, consider this ancient structure as a place of observance, study and recreation. The long corridor, which gave access to the humble Franciscan cells, is nowadays a 23 meter-long scale-model, on which you can stand and from which you can admire, step by step, a bird’s eye view of the Aso Valley.

During the Piceno period, the Aso river permitted the growth of a flourishing civilization, who traded with people living on the other side of the Adriatic sea, exporting all kinds of products, from pottery to jewels, weapons and sculptures. The objects housed in these rooms were found during the excavations of the 19th century in Colle Cuccaro and Contrada Crocifisso, which are located very close to the historical centre and which witness the continuity of the social life within this town.

The rooms are divided into sections, each representing a different historical period. This method permits the visitor of the museum to enjoy quite a rare and sublime / breathtaking view, which is considered to be part of the cultural and historical assets. Accessibility and fruition are the key-words of the network of Museums in the Piceno area, and in Monterubiano this is the main reason for visiting the Centre. The sign “Do not touch” has been replaced with “Do not touch – (except for the blind and for who has difficulties in recognizing art)”.

For each section, though, it was chosen an object that people can touch; it is not a copy, it’s a real find that represents the synthesis of all the other objects housed in the room. The slogan “Right to art” wants to give voice to a new way of receiving the work of art, giving the right to really enjoy an art collection as a landskape, simplifying the approach to art, as it happens in archaeology, going towards it, straight ahead, playing and using the sense of touch. The experience of the Cultural Centre of San Francesco in Monterubiano is an aesthetic experience, where you learn using the senses, as the original meaning of the word “aesthetic” suggests. According to this method, looking out the window of the museum, walking on the scale-model or touching a thousand-old find represent all together a point of departure for getting to know the history of a village which is a town.

As you walk out of the museum, enjoy the atmosphere of the cloister: smell its aromatic herbs, pause and listen to the music coming out of the school of singing and breath in deeply the knowledge of the Bel Paese, Italy.